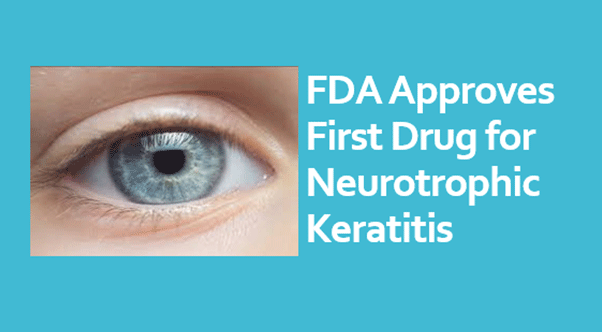 Lack of a thorough treatment regimen that is capable of completely healing the cornea, which this treatment provides, was one of the banes of this condition. The FDA is hailing this as a breakthrough treatment because the treatments for Neurotrophic Keratitis till now for this ailment consisted of largely palliative options that were symptomatic in nature and did not target the underlying causes. These included:

The drug has been developed by the Italian company, Dompé farmaceutici SpA. This is the first ever application of a human growth factor as a drug or treatment and the first ever topical biologic medication to be approved in the field of ophthalmology. A drug that targets the root pathology of Neurotrophic Keratitis, cenegermin was authorized by the EMA in 2017.

The molecule for this FDA-approved drug is cenegermin. The study, whose results were the basis for the approval by the FDA, was carried out on a sample of 151 patients over a period of eight weeks. The dosage after this study has been fixed at six drops a day, for eight weeks. This is the dosage during the trial, which had resulted in complete healing in 70 percent of the subjects.

The approval for cenegermin was given by the FDA under its Priority Review designation, which hastens the time for approval of a special case drug. This provision is exercised by the FDA when it determines that the drug can cause a significant improvement in the condition of the patients. This approval marks the first therapy from Dompé to be available in the US.

In addition, Oxervate also gets designated as an orphan drug, which are drugs for rare diseases, meaning they are not for common ailments. In the case of neurotrophic keratitis, fewer than 65,000 Americans have this condition. This designation paves the way for incentives to augment the development of such diseases.

How is Neurotrophic Keratitis caused?

The causes for Neurotrophic Keratitis are varied. These are some of them: